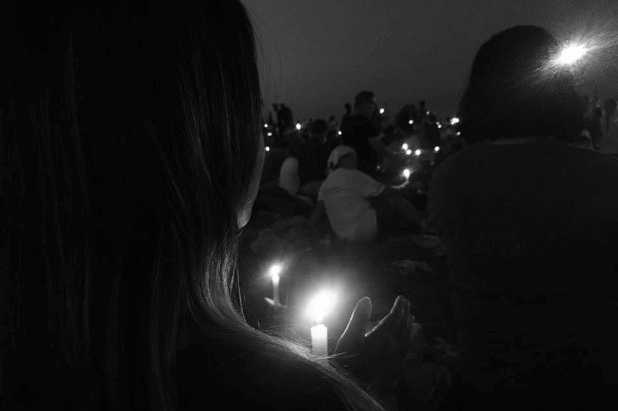 “ME” BEFORE WORLD YOUTH DAY

Despite the fact that I was still in my early twenties, I felt extraordinarily old coming into World Youth Day (WYD) in Krakow, Poland—which was ironic, because this event was obviously for “youth”. Yet somewhere along the way, I had lost my “youthful vitality” much too soon. The zeal and energy I once carried was replaced with heavy disillusionment, confusion about the future, and even more confusion about my present occupations.

It manifested itself in my body too. My body was aching and creaky from hours and hours of sitting at desk jobs, while simultaneously striving to complete my university degree. My life, it seemed, had become nothing more than a fulfillment of duties. I had given up on the possibility that life could be a great adventure, resigning myself to the sad acceptance that maybe this was all life had for me. And maybe I’d learn to be okay with it.
But, as it turns out, God had far bigger dreams for me. 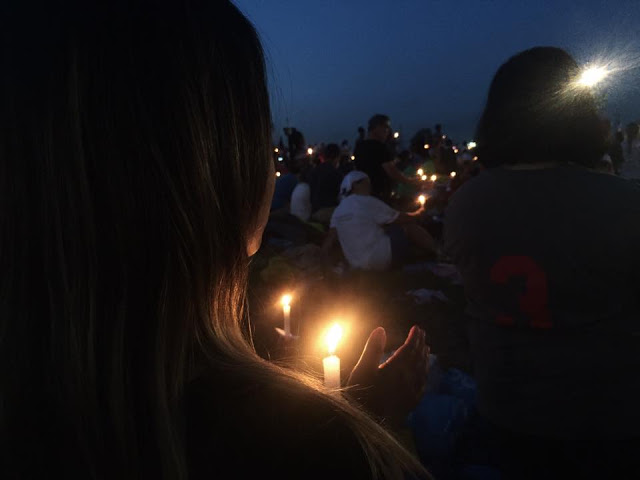 Me, alongside 1.6 million pilgrims, at the Overnight Vigil.

DAYS IN THE DIOCESE

God first began to break down my hardness of heart in the little Polish town of Ostrowiec Świętokrzyski (Ostrowiec, for short), where my group spent Days in the Diocese (DID) one week before WYD. For anyone who has reservations about attending DID, I have one recommendation: don’t. For most of us, DID was one of the highlights of our trip, since it allowed for intimate interactions with locals and pilgrims who lived in the host country of WYD.
Believe me when I tell you that Polish hospitality is one of the best I’ve ever encountered. Seriously. Their unreserved kindness and generosity was astounding, and it was through them that I experienced God’s outpouring of love—the kind that you can only accept with humility because you know you could never pay it back in full.

There are too many stories to tell, but I’ll mention a few to demonstrate the kindness of the Poles. At the end of WYD, when 3 million pilgrims were trying to get out of one field in the sweltering heat (you can imagine how crowded and chaotic that was), one local, out of the kindness of her heart, turned on a hose and poured water over us to relieve us from the heat. Another family hastily handed out beverages to pilgrims who passed by their yard, seeing how thirsty and famished we were. Another opened up their house for pilgrims to use the washroom. These locals had every right to groan about the fact that hundreds of pilgrims had invaded their quiet neighbourhoods, but instead, they welcomed us wholeheartedly.

Another tremendous sign of God’s love for me was my Polish host family, who accommodated us during our stay in Ostrowiec. No matter how late we returned home, they always, without fail, made sure we had a warm meal waiting for us. They even made their signature Polish pierogies for us—in four different flavours! I will forever cherish my encounters with Elizabeth, Piotr, Natalia, Michał, and Dominik, whose love and kindness surpassed any language barrier in existence.

On our last day of DID, that’s when I felt it: a shift in my heart. It was less like stone and more like something fleshy, beating, and livingagain. Tears of gratitude spilled from my eyes at the final mass, while songs and prayers were interchanged in Polish and English. Through my touching encounters with the people of Ostrowiec, God had opened my heart for the next stretch of the journey: World Youth Day.
WORLD YOUTH DAY
As its name suggests, everything about the fast-paced series of days that make up of WYD are imbued with “youthful spirit”. From the moment we reached Krakow, the roar of pilgrims singing and cheering at the town squares was constant. Whoever said young Catholics were boring, constrained, and prudish people was so wrong; WYD was proof of it.
WYD was straight up rowdy. But in a good way—the kind that comes from young pilgrims being excited to meet other young pilgrims from all over the world who share the same faith. I admit, my own group was extremely rowdy too. Apparently initiating random dance parties and conga lines at unexpected times was “our thing” … and when priests and sisters joined, that’s how you knew it was a party. I vividly remember blasting Drake and Justin Bieber on portable speakers as we paraded the streets of Krakow, proudly representing our nation of Canada.
But it wasn’t just rowdy. WYD was also immensely solemn. Adoration was held every night at St. Mary’s Basilica in the old town square, and entering its doors to momentarily escape the excitement outside was quite the experience. Surrounding me were pilgrims from nearly every continent, kneeling before the Blessed Sacrament in profound silence and deep prayer. WYD wasn’t just an entertaining event to these pilgrims; it was something they took very seriously, clinging onto the Source of Truth who was the reason for this huge gathering.
The Lord cradled my heart during adoration. I had no words, but I didn’t need any—all Jesus ever wanted was my presence. His gaze captured me—the same gaze that the saints have spoken of, the one that inspires, heals, and transforms all things. Despite my lack of ambition in recent years, I began to feel like maybe, if I continued to meet his gaze every day of my life, I, too, could become a saint. Here I was, in the City of Saints, rediscovering my calling.
In his Welcome Address,Pope Francis stated, “It pains me to meet young people who seem to have opted for ‘early retirement’. I worry when I see young people who have ‘thrown in the towel’ before the game has even begun, who are defeated even before they begin to play, who walk around glumly as if life has no meaning.”
He was essentially describing me. I was one of those young people who had opted for early retirement, whose days felt dutiful but strangely devoid of meaning. But God had restored my ability to dream, to hunger for more, because with him, life could be more. In fact, ‘more’ was what he required of me.
At the Overnight Vigil, Pope Francis said, “Jesus expects something from you. God wants something from you. God hopes in you. God comes to break down all our fences. He comes to open the doors of our lives, our dreams, our way of seeing things. He comes to break open everything that keeps you closed in. He is encouraging you to dream. He wants to make you see that, with you, the world can be different. For the fact is, unless you offer the best of yourselves, the world will never be different.”
WYD was my re-awakening, as it was for many pilgrims. It was a reminder to live with fervour, joy, and determination, as all young people should. And it was God’s refusal to let me settle for a life that was far too small for my calling. It’s dangerous to resign to a life that no longer hungers for more, that is willing to accept crumbs. Because God did not make us for crumbs; he calls us to live very full lives, like the saints did.

After traveling to the City of Saints, I knew that’s what I wanted. I wanted to bask in God’s love the way they did. I, too, wanted to be wildly transformed by his gaze in whatever context I found myself in.

The moment I stepped back into my home parish in Canada, the image of the Divine Mercy caught my eye with striking new gravity. There it was again. The same image I had seen countless times in Poland, where it had originated from, was sitting here in my own parish miles and miles away. To me, it was symbolic—a reminder that my experiences in Poland hadn’t remained there; they were with me now, chasing me back home, and it was my responsibility to let them grow where I had been planted.

So fellow pilgrims, let’s do that. Let’s grow where we are planted. Let’s bring the message of God’s love and unfathomable mercy back to our mission areas—to our homelands.

I’m Celine Diaz, a motivational blogger and vlogger sharing insights on self-worth, strengthening your mental wellbeing, and finding the courage to pursue your passions. My lifelong struggle with low self-esteem, harsh self-criticism, anxiety, and perfectionism made it hard for me to feel truly comfortable in my own skin. As a result of these challenges, I embarked on a journey of healing, self-love, and maximizing my fullest potential—and now I share with you the wisdom I've learned along the way. Join me on the journey of living with intention and self-awareness; being the best versions of ourselves while accepting our quirks and imperfections; and uncovering the amazing lessons that life has to offer. For more about my story and what inspired me to start blogging, check out this video: https://celinediaz.com/about/ View all posts by Celine Diaz

Experimenting with different formats. 😅 Anyway, here’s why you don’t have to feel threatened by another person’s success (again). ✌️
%d bloggers like this: