A few weeks ago I had the opportunity to catch up with a friend and fill each other in on the past two years of our lives. Before then, I’d been so busy plowing through the days that I hadn’t realized how far I’d come. It was only after hearing the stories that were coming out of my own mouth that it dawned on me: I had grown exponentially in the past few years, although I hadn’t noticed it.

The New Year is as much about celebrating past successes and blessings as it is about making future resolutions. So this, here, is my attempt at doing so.

I never would’ve described these last two years as “magical”—not by a landslide.

In fact, there were many times when it felt downright awful. I had my heart broken (I hate that phrase because it sounds so typical—it hardly captures the reality of the experience) … just as I was about to take on my first professional co-op experience (which involved a lot of growing pains due to the high learning curve) … while my best friend was on the other side of the planet doing a year-long co-op in Spain (the timezone difference made it harder to converse). On top of this, I saw a counsellor for four months after being introduced to new mental health challenges.

Despite these bumps on the road, however, I still managed to finish what needed to be completed at this point of my life.

With the grace of God—along with blood, sweat, and tears—I finally completed my Bachelor’s degree and double minor without once wavering from my high standards (including getting 100% on an extremely difficult course, by the way).

I gained nearly two years of professional work experience in my field of study through various co-op placements, including one in the area of mental health (which allowed me to channel my own lived experience into helping others with similar challenges).

I also traveled to Hawaii, Spain, Italy, the Philippines, Niagara, and Poland (where I joined millions of young people at World Youth Day to see Pope Francis, and performed a dance routine with my best friend, where we started Project Pursuit). On top of that, I began taking better care of my fitness, doing occasional drop-in dance classes, and forming new friendships, while strengthening older ones.

It’s just amazing, because I remember how genuinely terrible I felt during certain points of my life; it’s hard to believe that, by the end of these two years, I had accomplished this much.

Even if it felt like I was walking around with a metaphorical “limp” at times, I still got up, dressed up, and showed up for life—no matter what.

I was broken, but never idle. My tears ended up being the raindrops that nourished the soil from which I grew. And now, I can honestly say:

“With every broken bone, I swear I lived.” – OneRepublic

Sometimes all we can see is the mess—tangled bits and pieces of our lives, without having a clue how this chaos could ever make sense—and believe me: I wanted to roll my eyes every time someone told me, “God has better plans,” or, “Someday this will all make sense.” But the fact is that it’s true. 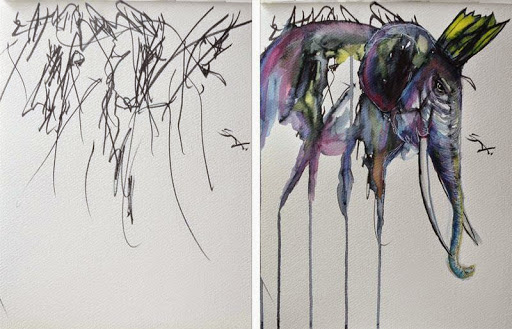 These images (above) were created by a mother who turned her daughter’s scribbles into beautiful works of art.

“For I know the plans I have for you, declares the Lord, plans for welfare and not for evil, to give you a future and a hope. Then you will call upon me and come and pray to me, and I will hear you. You will seek me and find me, when you seek me with all your heart.” – Jeremiah 29:11-13

As we welcome the New Year, let’s reflect on our lives for a bit. Maybe you, too, will discover that despite how challenging the last year has been, God has blessed you with more than you realized—and has taken you further than you ever thought possible.

View all posts by Celine Diaz